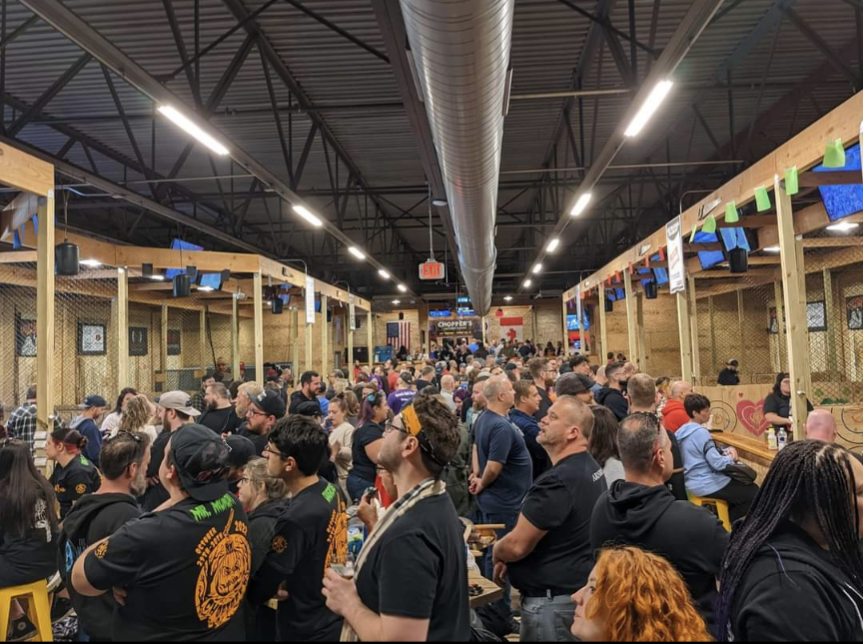 First, thank God its over! Second, COME BACK!

What a weekend! The 2022 Choptober Challenge did not disappoint. Absolutely one for the record books and one Choppers can be proud to have hosted. This is the 5th year, but Covid-19 unfortunately won 2020. Not 2022 though, that went to Corben Decker. Congratulations! You’re in the movie!

Before I get into a rant about my observations, I want to thank some very special people who are always by my side. Always looking out for the best interest of Choppers, as well as looking out for all of you. People who do things without asking what’s in it for them. They offer ideas. Tell me I’m an idiot when I need to hear it. Collectively, they hold it all together.

In no particular order. Kate O’Connor. My Lil General. Not just at Choppers, but outside of Choppers, she is the best. Not going to get all sappy because she’ll probably cry, but I’m lucky to have you in my life. Kevin Bradley. From day 1, you have been an amazing selfless human. Always willing to do anything you can to help. The number one trusted call maker.

Joe Nessler, the unofficial Mayor of every town USA. Thank you for all you do and the leadership you bring to any situation and the time and effort with everything from the youth leagues to the beer leagues. I don’t even know where this guy works. I just know he is pretty fertile and likes hats from REI.

Krista DiAngelus. This girl just gets me and knows how to connect with me. Her interest in making these tournaments go off without a hitch and willingness to jump in everywhere needed is so amazing and always appreciated.

Fallon Kuehner. This girl doesn’t even live here, but she gets on every call to attend every meeting. She has everyone’s best interest in mind and is like an elephant when it comes to remembering past events, dates ect. She is an asset in so many ways and I can’t thank her enough.

The amazing staff and league member volunteers can’t be forgotten, and aren’t forgotten. Every single one of them has an important part to play and they all do an amazing job. Not only during the 2022 Choptober Challenge, but every day.

Don, you were an amazing announcer. Thank you for offering to do that my friend!

Overall struggles we had

When planning these major tournaments, there are so many things to factor in. One of the biggest things is time. Unfortunately, its also one of the biggest things you have no control over and can really kick you in the ass. We had large chunks of time to kill in the past. This time, we struggled to maintain a schedule. Hopefully it went unnoticed for most. Unlike years past, the 2022 Choptober ran non-stop.

I expressed my observations to a couple of people verbally, but I think it’s worth a discussion as a community to pinpoint other observations and to keep record of them. We can then factor these in for planning the upcoming Countess Cup (April 29 &30, 2023) as well as The 2023 Choptober Challenge.

There was a decent number of players who were no call, no shows. Keeping these players in the bracket because we are expecting them to show only creates more matches in the bracket. It is a multi-fold issue and I don’t know a good way to address it.

On one hand, you have those that want to see the bracket ahead of time. I totally get it. Its fun to run scenarios. Guess outcomes and make predictions. Gambling on brackets is a part of human culture. However, setting the bracket when you dont know the actual players ahead of time creates the need to have ghost matches.

If you wait for players to check in and pull a player that didn’t check in from the bracket, there is no way to to throw them later. It puts the venue at a real disadvantage.

Players then demanding to throw against a ghost is then an additional waste of time of ALL the other players. Yes, we understand you want the practice throws, but at the same time, the match shouldn’t even have been created and is now holding everyone else up.

Everyone wants to throw as many axes as possible. To have the best chance to actually be beaten or win. Go back a year or two ago with a field of 256+ players with random seeding (except for the Vin vs Kump match, those are planned) and you were sure to get about half of round 1 of A bracket being swept in 3. Round 2 of A, you might get 30% of them still a sweep.

The 2022 Choptober Challenge had almost every single match go big axe every round, and go the distance to a rubber match. The amount of time this takes vs half of the matches being sweeps was underestimated. The level of everyone’s skills has risen SO much. It is great to see, but was definitely underestimated.

Urgency to complete the tournament

When Choppers hosted the 1st 256 player tournament back in 2019, it was obviously new. Everyone that attended had a sense of urgency. We made strict rules about not being in your place when your match was up. Everyone was repeatedly reminded to bring their big axe with them to their match, not just their hatchet.

We’ve completely lost that urgency. Everyone (in my opinion) had the mindset of there being no hurry. I don’t blame them as we have in the past flown through the bracket. What nobody acknowledges though are some of the factors listed previously.

While we have display TV’s with upcoming matches, many people pay it no mind and figure someone will get them when it’s their turn. Coaches are calling names of people they have no idea who they are. People are wandering everywhere looking for someone who went out to a tailgate party in the front of the building where there was no speakers. Not a care in the world. No urgency.

A venue needs to deliver the tournament they promised, but they can’t do it without cooperation.

If I am being honest, I somewhat lost some faith in the community about a year or so ago. There was a series of events leading up to it, but I distinctly remember looking at the crowd of people at league and every single one of them was on their phone checking their stats. Complaining about something that happened with CRS, or had a look of frustration on their face. It was honestly, sad. All the fun of what got us into axe throwing has been sucked out of the community.

Don’t get me wrong, I get that there is a need for healthy competition. But there is also a line where it becomes unsustainable. This led me to having a few conversations with my trusted few. Since then, Choppers has been making a constant effort in pushing people to have fun again with axe throwing. The sport isn’t going to attract new throwers if it’s no longer fun. Frustrated players are going to give up. We can’t keep encouraging that type of environment.

Our monthly Turnpike Strike! has become a well known “thing” in axe throwing. It is always fulfilling to me to see people be excited for the opportunity to participate in one when they have the chance. The 2022 Choptober version awarded the opportunity to a field of 32 players. From what I could tell, everyone had a blast trying out our Beer League games. The hope is these games spark new ideas and other venues start adopting the idea of bringing back the fun. We need it to spread.

The Spirit of the Choptober Challenge

I’ve said it before, and will say it again. My intention of Choptober was never about being the tournament to determine the best thrower in the world. There are already other tournaments attempting to do that. Instead of a large axe throwing tournament where people had fun, I saw a party where an axe throwing tournament broke out. I think we have done a decent job delivering that.

You were an experiment & didn’t know it

Sorry, but in a way you were. It was about a month out from the 2022 Choptober Challenge when I realized one of the things on my “to do” list hadn’t been done. Announcing the breakdown of the prize pool. I decided to not announce anything and just see what happens. We already announced the overall prize pool. How important is the breakdown? Will people even notice? They didn’t. Not one single person asked about the breakdown.

It was 2019 when I wrote about paying deeper in the brackets is one step towards growing and sustaining a tournament circuit. It is great to see this has (to a large degree) become the norm. We could do a better job of it in going deeper, as other tournaments could as well.

One thing I have seen over the years is the excitement those winning money getting to keep their “Big Checks”. We are even guilty of not normally giving out big checks past 5th/6th place. They are expensive. I’ve written before about the cost of holding these tournaments. Handing out big checks is just another cost to a venue owner. But to the players, its meaningful. Very meaningful.

This year we payed out to 13th place, meaning the top finishing 16 throwers. Austin Agosti was one of those players. Before he even knew he was able to take his big check with him, he came up and said how much he appreciated us putting the tournament together. Later on when he found out he got to keep the check, he was probably happier than learning how much money he had won! The response from the others was the same. People want those. In our case the prize pool was $7500. The cost of the big checks were $400, so we split the dollars to encompass that expense. That big check IS a prize, and the reaction from the players was well worth that experiment.

We put feelers out about who would join an after party. The results were not a surprise. However, I wonder if more people would have attended if they understood what we were cooking up. I’ve been to other after parties. We have done other non-axe throwing related after parties. This year, with the goal of bringing fun back to axe throwing we decided to incorporate it into the party. It only makes sense. What do axe throwers love? Axe throwing, duh!

Joey the hat came up with some amazing games for everyone to play. Over some time, in the quest to make it fun, he has proven out some great games. It was proof enough for me that every lane, all night long, was filled with people having a blast. No real competition. Just playing. Using their creativity to improve or expand the idea. And that’s what we want.

Bring back the fun!

Thanks for being you!