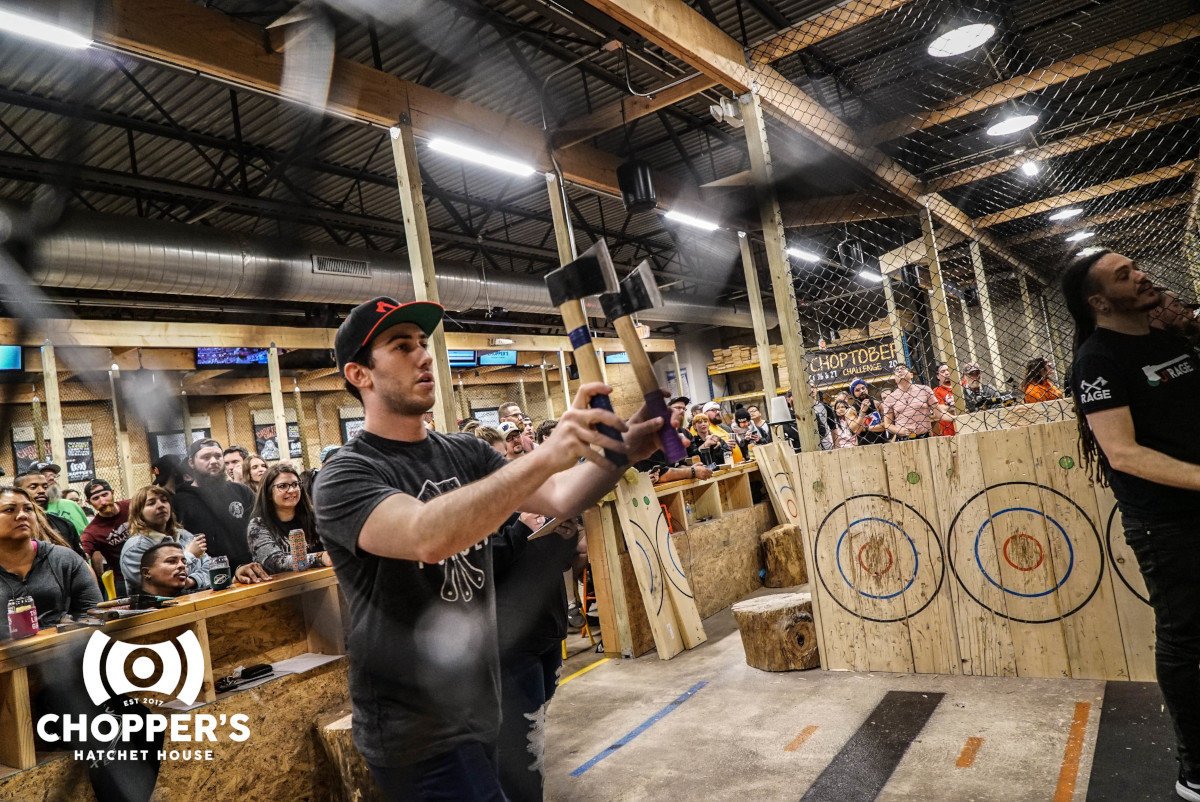 Each Season will be something new

In 2020 we were introducing a few new Axe Throwing Leagues to the Calendar. One of these was our Fun Friday Leagues. Despite some speculation, we had all 3 planned out, just not announced before another location announced a Big Axe League. We feel honored that they think we copied, but that couldn’t be further from the truth. We weren’t going to announce all 3 new leagues in one day, we were spreading the announcements out. If anything, from the history and track record, I would imagine their announcement was in response to our announcement of the Monday Industry League, but honestly, who really cares??! Not us. Choppers will keep innovating and trying to move the sport forward.

We brought youth leagues back on Sunday afternoons. In addition, we are starting up our Industry League on Mondays. These are only open to players who work in the axe throwing industry. And we are also excited to introduce our Fun Friday Leagues, on Tuesdays… err, I mean, Fridays! These Friday Leagues will change each season. They will also only run for 6 weeks vs the standard 8 week seasons. This is because we are trying them out and don’t have all the kinks worked out just yet. Mainly though, we have our monthly Turnpike Strike (TPS) tournaments held on the last Friday of each month. Registration in Fun Friday will give paid entry to any TPS that falls within the regular season.

Everyone loves throwing the Big Axe. In addition, at this stage of the sport under the current rules and game play, it is how you win tournaments. There is such a high level of skill at these major tournaments that messing up in hatchets is so rare, it comes down to messing up in Big Axe. Every round is settled with a Big Axe. No ties. This skill being as sharp as an Axe Gang right out of the box is necessary.

Players will play each player in the league twice. Having roughly 20 members of the league allows for 7 – 8 matches a night. A match is 5 throws. Standard target is open for first 4 throws. Clutch is open for the 5th and final throw. Tie Breaker is a Big Axe Clutch-Off.

Choppers held a test season of Doubles League in 2018 and honestly, it was a BLAST! So much fun. So different than any standard league play. With all the hustle and bustle of everyday tasks the ownership and management team has to deal with to keep the doors open, it just got pushed to the side on doing it again. This is why we are committing to a schedule for the year now. So the fun we all love to have is baked into the weekly schedule for Fun Fridays League.

Teams will register and score standard 3 game matches. Throwing as Doubles. All standard rules apply as the Skill Doubles.

This one I am not going to give away how we will be doing it, but it is a tested and proven fun way of doing a Team for League. Many other individual sports do Teams. Axe throwing has not found a way to standardize this yet. We believe we have a way and will be debuting it shortly. Can’t wait for Season 3!

Although not a common throw, underhand IS a legal throw in league play. Having a short 5 week season with week 6 playoffs using this throwing style might just be more fun than we realize. The other skill we are contemplating being the Fun Friday League theme is Ambi. One of the more popular skills at tournaments like the IATC or Choptober.

Season 5 – Taking This League To Vote

With our push to create new and fun skills and games, we are leaving season 5 as TBD. To Be Determined. We are confident that there will be something new and exciting to try out come season 5 in 2020.

Commitment To The Community

We are hopeful that our new skills submission page will allow throwers in the community a voice to share their ideas. A place new games can fall in the hands of those who want to progress the sport for the community. Not just a place that follows the leader or is more concerned about their corporate bookings. Yes, those keep the doors open, but Choppers believes strongly in the community and strives to continue to build that community.

If you havent done so already and have a skill game you would like to submit, you can do so HERE. Also be sure to sign up for one of our Leagues. Although we labeled these “Fun Friday Leagues”, we have fun at all of our Leagues and want you to join us as well.