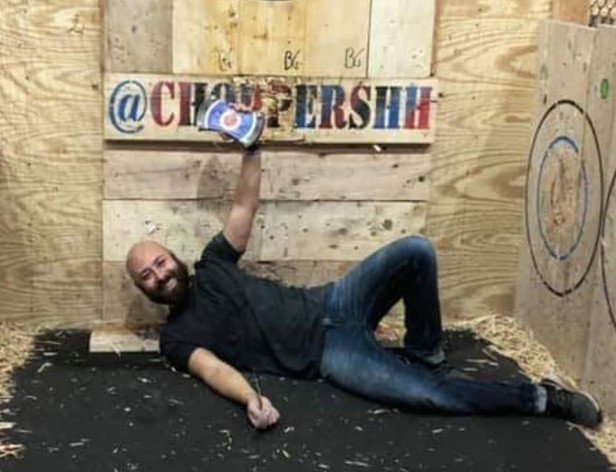 Coming to a close

Choppers Holds a monthly tournament known as the Turnpike Strike! A smaller scale tournament usually consisting of 2 different skills competitions as well as a double elimination tournament. Held on the last Friday each month. December’s TPS was a little different than all the others.

The prize pool consists of $450 for tournament and skills. The tournament portion was always winner take all, but as I wrote about in the paying deeper blog post We changed it up and paid the prize pool to the 6th place. I would like to keep it this way moving forward, and just making the prize for skills a little less.

Instead of 2 skills this month, we wanted to give everyone practice for the upcoming IATC “Round 1” scheduled to be held on Jan 5. Round 1 is open to those throwers who qualify and takes the top throwers from each location to see who will move on to the International Axe Throwing Competition (IATC) in Toronto in February. The format is 75 hatchet throws and 15 Big Axe throws. The 75 hatchets is scored as 3 games (15 throws) and the average of 5 matches is taken. Big Axe cumulative score is the tie breaker.

Seeding for this Turnpike Strike! was based on the Round 1 results. Typically we seed based on previous month’s placements and then based on registration time. If a player missed the prior month, but signs up earlier, their seed is higher than a player who waited until the last minute to register, who then would be playing higher seeding throwers. Obviously the advantage is to register early, but not this Turnpike Strike! The results from the Round 1 seeded an extremely competitive field more appropriately based on throwers skills. The rest of the tournament did not disappoint.

This is a standard double elimination bracket. We usually do the first round of A bracket as best of 3 while everything up to the semi-finals in both A and B brackets are Best of 5. Once it gets to Semi-finals, we go Best of 7. Being as this is a double elimination, everyone needs to lose twice. If the winner of A bracket gets beat in the first Best of 7, both players will need to play a second Best of 7, potentially playing 14 matches in the finals. That is exactly what happened last night.

With a field of 54 competitors all seeded based on skills, there were some amazing matches and upsets all night. How does the saying go? Any given Friday? This one bled into the wee hours of Saturday. Finishing at 3am with a few dozen people still tuned into the live stream, it was not one to miss.

Mike (Rupert) Moore, Jr was on fire last night at the Turnpike Strike! coming in as the 4th seed. He threw with determination all the way through the A bracket to met with Elliot (El Dorito) Rosario in the finals. Both seasoned throwers out of multiple leagues at Choppers. Players that anyone the follows the sport would know. Rupert having a little less pressure in each of the harder match-ups as the field narrowed. In no way was his journey easy, just less of a final outcome had he lost. He didnt. Instead, he sent some heavy hitter to B bracket that Elliot would have to fight later on in the tournament.

B Bracket – The Battle

Elliot having a harder route after being knocked out in the 2nd round of A bracket by Choptober’s 7th place finisher, Rob Knelly. Any loss would have sent him packing. He reached deep within and threw fire the rest of the Turnpike Strike! Some of the throwers in Elliot’s uphill battle through B bracket were the likes of Joe (roosteR) Perry from Choppers, Alex Mitchell from Baltimore, Jon Vidal from Philly. He also had to take out heavy hitters like the 21 yr old 5th place Choptober finisher Curtis (Warner) Baptist. The Philly Space’s Mark (Just Mark) Hunt. WATL Thrower David (Cyclops) Cycon who you can see on just about any ESPN televised tournament was even taken down by El Dorito. Matt (Spicy Tuna) Kramer was his final competitor before taking the crown for B bracket and facing Moore.

The finals went the distance. Rupert needed to be taken down twice and it did not look to be in the cards to loose a round. He came out guns a blazin and took the first the 3 rounds. One more win and he would have had this Turnpike Strike in the bag. Elliot must have felt the pressure and just turned up the heat. Coming back winning 4 straight rounds in a row to bring it to a place where no player went undefeated at least once.

In the 2nd set of Best of 7, El Dorito came out swinging taking the first round. Moore answered right back taking the next 2 games bringing it to 2 games to 1. Once again, El Dorito turned it on and swept the rest of the matches becoming the last Turnpike Strike! winner of 2019. Congratulations to Elliot Rosario on his first TPS win! We will be adding his name to the Choppers Champions wall for bragging rights.

We will look to continue hosting these fun monthly tournaments. We want to keep providing the environment competitive axe throwers can achieve their goals, reach new levels, get the recognition they deserve. Providing them with this is and has always been one of the commitments we make to our League members and members of both throwing affiliations. The World Axe Throwing League and the original founders, the International Axe Throwing Federation.