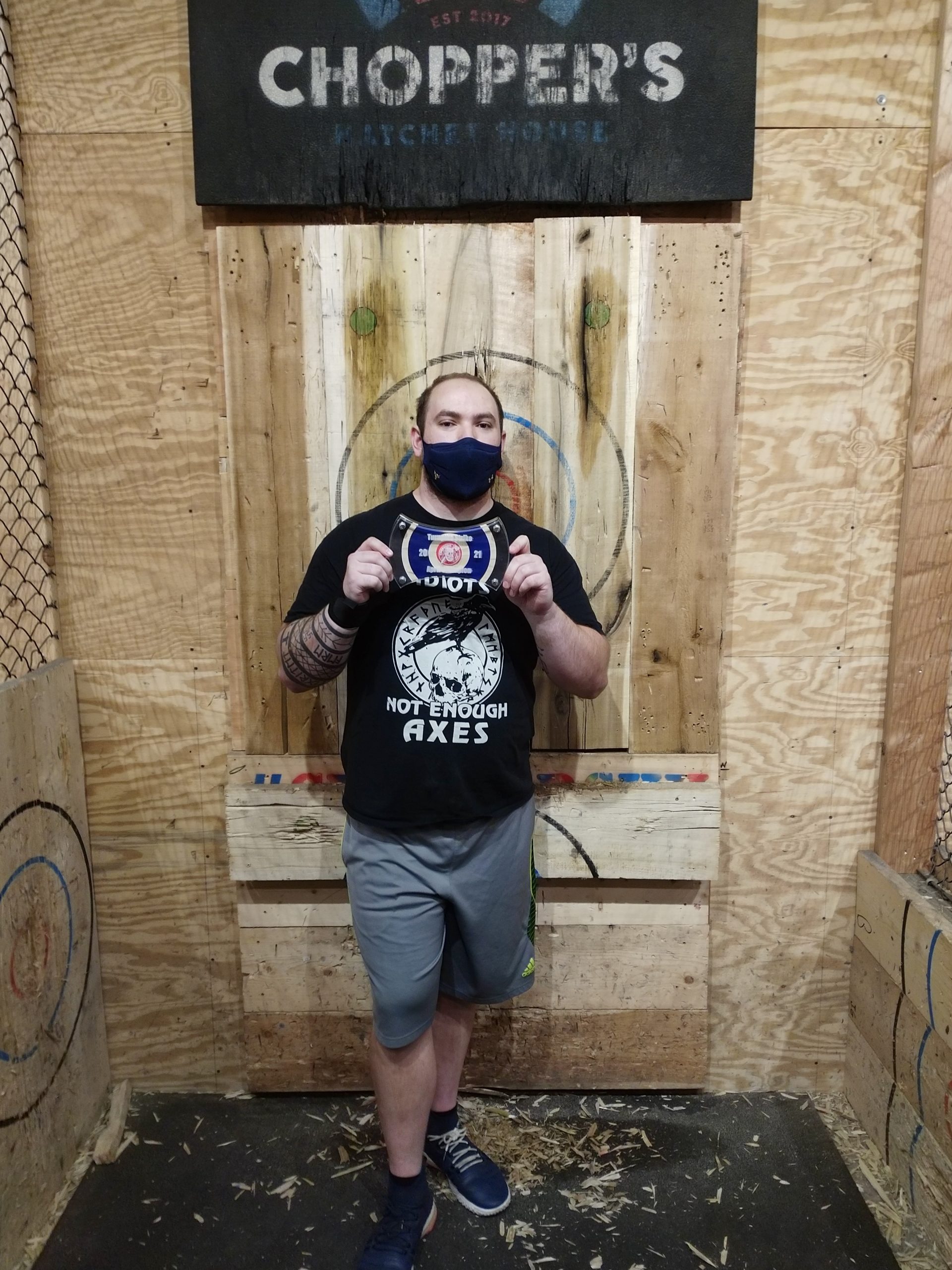 I was really looking forward to this one. Thankfully, the feeling I got from the energy at Chopper’s on April 30th 2021’s Turnpike Strike! says others were feeling it as well. This gave me a warmer feeling than any other big event we could have held. I had people breaking stones about us glorifying mediocracy, but I did care. That is exactly what I wanted to do. This TPS! was about celebrating everyone. Getting back to having fun axe throwing. Maybe it’s just me, but we can’t loose site of what’s important. Community.

Top throwers are absolutely a part of our community. I’m not trying to imply otherwise. I just see a drifting in both organizations WATL and IATF towards catering to making things more difficult to keep up with the growing skill levels. The top throwers are amazing and should be celebrated. However, at our core, axe throwing started as fun (with a somewhat level playing field) and should be played as such.

The entry barrier was pretty simple. A player could not have ever thrown an 81 in IATF League play. Yes, loops holes could be discussed, but the “simple” milestone of never having thrown an 81, in my opinion, was enough to get the ball rolling and get interest in attending. There are SO many great throwers from axe throwing venues all over that simply don’t register for these tournaments because they feel they have no chance. That shouldn’t be. Maybe I am just a different, but being part of the fun, win or loose, is what it should be about. But I totally get it. Why bother when you know you have no chance in getting past a certain point. And THAT is what this TPS was supposed to be about. It could be anyone’s night! And it was.

1.5 Spin Around the World & Clutch Poker

What started as a 32 player field ended up being 28 players. We had 2 skills before getting into the double elimination tournament. We started off with 1.5 Spin ATW with a cap of 15 throws. This was out of many player’s element but they all did great! That was the point of it. A throw you don’t do every day on a simple to follow skill. From my time scoring, I saw the frustration as well as the celebration in moving onto the next throw and it was exciting. The energy was intoxicating and the accomplishment of completing it was awesome.

In the end, Ben Bingert took home the 1.5 Spin Title. Ben is a regular at Choppers monthly TPS! events and visits from Central Jersey. He is a non-affiliated thrower who always puts up a great fight.

Clutch Poker was won by Shakes, aka Kevin Reynolds from Choppers Wednesday Black. I believe this was his first TPS! and it was great to see him out there competing with confidence.

There were SO many great match-ups it’s hard to even begin to recap the night. The lady blades of Urban Axes were out IN FORCE on Friday and did not disappoint. Jen Reigel and Megan Clark walked through A Bracket like it was just another day. From what I understand it was Megan’s very first tournament, but it didn’t show that way. Both woman were throwing straight FIRE! They were not the only woman on fire. The B Bracket took a beating from Jenna Moore and The Jillest. Both Jenna and The Jillest fighting all the way through B bracket starting in Round 2 with Gretchen C hot on their trail.

Jenna faced Alana C then Amanda Pitts only to face a weekly rival of Ashley Bradley. After taking out Ashley Jenna proceeded to give an axe throwing lesson to Ashley’s Husband, Mathew. Her tournament life was ended in a best of 7 against Ben Bingert who ended up taking 2nd overall.

Gretchen’s tournament ended against Ben as well in a best of 5, but not before taking out Pot Luck Mary in round 2 followed by Keggin in round 3 and Sara Fortunado in a best of 5.

Such an awesome field of throwers with such talent made for some real excitement in the finals. Ultimately Jonathan Malaschvich (JT) took the April TPS! Title, but it wasnt easy. Jen Reigel met Ben in the B Bracket and secured her 4th place position. Ben battled it out one last time against Bryan Riley who secured his 3rd place spot after taking a few YEARS off from axe throwing. Bryan was a season Champion back in 2018 at Choppers and hung the axes up for a while. An amazing display of talent after such a long break. Maybe this will bring him out of retirement??

Congratulations to JT on an amazing well deserved win! Not only did you take First place, secure your name on the Chopper’s Champion Wall, take home a coveted Chopper’s trophy… but I think you won the award for furthest traveled as well as it appears you traveled from VA!

Thanks to everyone who attended. This event really made my day. I’ve been in a slump lately but seeing everyone having a great time really really helped me personally. Thank you to all those throwers who were not allowed to register but came out and showed your support. The additional help scoring, commentating on the stream, talking to participants was amazing. THIS is why I love the axe throwing community. We are all one big family and want to see each other flourish. We are happy for each other’s successes and celebrate WITH each other.